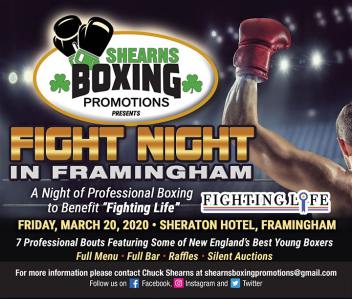 (February 11th) "Fight Night In Framingham", presented by Shearns Boxing Promotions (SBP), not only will be the first professional boxing event in the Massachusetts city, located 20 miles southwest of Boston, it has additional meaning for youngsters in that market.

"Fight Night In Framingham," will be held Friday night, March 20, at Sheraton Framingham Hotel for the benefit of Fighting Life, an after-school youth boxing and academic empowerment program, available 100-percent free of charge, to students beginning in elementary school through high school education.

"SBP is very excited and looks forward to putting on Framingham's first ever boxing event for this organization," promoter Chuck Shearns commented. "I think what is speaks the loudest right now is the amount of community and business support Fighting Life has received, including the presenting sponsor, Street Light Ventures, which is a great company. I think it says a lot about what A.J. Thomas and the board are trying to accomplish with this organization. This kind of support will go a long way."

Located out of UpperKuts Boxing Club in Ashland, Massachusetts, the Fighting Life Boxing Program was founded by owner and head coach, A.J. Thomas, as a resource and program to provide children with a positive outlet and outlook in life. Visit www.fightinglife.org to learn more about this organization.

The purpose of Fighting Life is to provide a safe space to promote structure, growth mindset, self-worth, and goal setting through physical and academic fulfillment and self-discipline.

"It is an outlet for kids," Thomas (pictured to the left) explained Fighting Life. "Kids who have been picked on, bullied, or at risk find it's a safe haven. We take kids from all walks of life. We don't turn anybody away. If their parents can't afford the membership fee to join the gym, we provide a voucher to apply to waive the fee. Not all of these kids come here to become boxers. We have fitness classes in addition to teaching boxing lessons.

"This show is important because the attention and money we receive will help us get more volunteers, equipment, and go places (to box) that they've never been. Any money we receive will go straight to the kids. Our dream is promote out own shows someday to get our charity's name out there for the benefit of our programs. Boxing is growing here in Framingham and we believe that there will be more boxing in our city. I even check on them in school and if they need help, they'll have a big brother right next to them. Everything is for the kids!"

Two unbeaten pro "graduates" of the Fighting Life Boxing Program, super featherweights Timmy Ramos (5-0-2, 5 KOs) and Nelson "Chino" Perez (2-0, 2 KOs), are fighting in the main event and co-feature, respectively. Both train at UpperKuts and haven't forgotten where they come from, often teaching youngsters in the program how to train to become boxers.

"Timmy and Nelson have been with me for years," Thomas added. "They've used their efforts in boxing to better their lives. We're all family here. Timmy and Nelson are still part of our program because they help the other kids."

Ramos, fighting out of Framingham, was a two-time New England Golden Gloves champion as an amateur. He is in the 6-round, main event against Carlos Marrero, III (2-3-1), of Bridgeport, Connecticut.

Perez, who hails from nearby Marlboro, is another New England Golden Gloves champion. He faces an opponent to be determined in the 6-round co-featured event. "I try to teach the kids to stay out of trouble," Perez remarked. "I coach them a little to help them live and prosper. It's great seeing these kids in the gym. I'm very excited to be part of this event to benefit Fighting Life."

Boston heavyweight Tracey Johnson (4-7-6), whose brother Demetrius Andrade is a past Olympian and reigning WBO super middleweight champion, takes on Larry "Hitman" Pryor (11-22-5, 5 KOs) in a 6-round bout.

(February 4th) Shearns Boxing Promotions (SBP) has announced it will bring professional boxing for the first time ever to Framingham, Massachusetts with "Fight Night In Framingham," Friday night, March 20, at Sheraton Framingham Hotel.

Proceeds will benefit Fighting Life, an after-school youth boxing and academic empowerment program, available 100-percent free of charge, to students beginning in elementary school through high school education.  With the continuous growth in technology and available access to various social media platforms today, children (especially those ages 11 to 18 years) are easily exposed to and influenced by various social pressures, such as but not limited to, hatred, drug availability, and everyday violence.  Located out of UpperKuts Boxing Club in Ashland, Massachusetts, the Fighting Life Boxing Program was founded by owner and head coach, A.J. Thomas, as a resource and program to provide children with a positive outlet and outlook in life.

"We are extremely happy to bring professional boxing to Framingham for the first time," SBP president Chuck Shearns said, "in addition to teaming with such a great cause in Fighting Life. "We believe that there are plenty of boxing fans in the community who will enjoy a quality show. The early support for this event has been amazing and local businesses have been extremely charitable.

"On a personal note, SBP and Framingham have a very important history together. It is where I first met my wife, Karen, and lived when starting our family. I also boxed in Framingham when I was younger."

The City of Framingham, located 20 miles southwest of Boston, dates back to the American Revolution and, perhaps, may be better known as being part of the famed Boston Marathon course. Framingham may never have had a pro boxing show held there, but it doesn't necessarily mean boxing isn't popular in the city of nearly 69,000 residents.

"We've had amateur boxing shows in Framingham, but this will be the first professional event," Thomas explained. "Kids here are into boxing even though they may not be as knowledgeable about boxing as elsewhere. If more kids understand what boxing can do to better their lives, boxing would have and will get bigger with more exposure to the sport, and that's why it's so important to support this show."

Framingham's most notable boxer is 2008 USA Olympic Team alternate, Danny O'Connor, who has 30-3 (11 KOs) as a pro. Many Framingham-area boxers now have an opportunity to establish their own names in that market, starting with the March 20th show, including unbeaten super featherweight Timmy Ramos (5-0-2, 5 KOs).

Ramos, a two-time New England Golden Gloves champion, plans to grab the local spotlight in the 6-round, main event against Carlos Marrero, III (2-3-1), of Bridgeport, Connecticut. In 2017, Ramos fought to a 4-round, majority draw with Philip Davis, who Marrero upset in his last fight by way of as 4-round, split decision.

In the co-featured event, undefeated super featherweight Nelson "Chino" Perez (2-0, 2 KOs) faces an opponent to be determined in a 6-tound match. Another New England Golden Gloves champion, Puerto Rico-native Perez fights out of nearby Marlboro, MA.

In a battle of quality MMA fighters in a boxing ring, Albania-born super middleweight Kastriot "Slaughterhouse" Xhema, fighting out of Greenwich, CT, makes his pro boxing debut versus Framingham favorite Saul "The Spider" Almeida (0-10-3, 20-11 in MMA), who hails from Brazil.

All fights and fighters are subject to change.