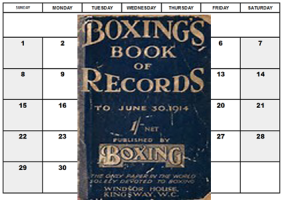 2008: After 82 years of use, the world-famous boxing ring from Madison Square Garden was retired in September 2007. It was then shipped 270 miles north to Canastota, New York and on January 12, 2008 the historic ring was assembled for one last time, as it will now be on permanent display in the International Boxing Hall of Fame.